Admit it. When you think of “making” or “baking” some type of holiday gift you think of cookies. Or maybe candy. No matter what it is I guarantee it’s full of sugar, and collectively there’s just too much of that going around this time of year (in my opinion)! I personally think there are many other little holiday gift ideas that are more exciting – and more original – than cookies, and since I like to play by my own rules here’s some of what I will be giving out this year…

One of my favorite things about this gift (other than how cute the bottles are!) is that you can make them in advance. In fact – this is a gift that will actually get better with time, which is quite the opposite of a lot of other homemade goodies. Simply slit two vanilla beans down the middle, drop them into 375 ml of vodka (I used the red Smirnoff) and within a few weeks you will have infused pure vanilla extract that someone can use in all sorts of recipes like granola, pumpkin bread, French toast, and oatmeal. And save some money by ordering your vanilla beans online instead of buying them at the grocery store! Amazon is cheaper for large quantities, but reviews are mixed. We get ours from J. Crow’s Marketplace. 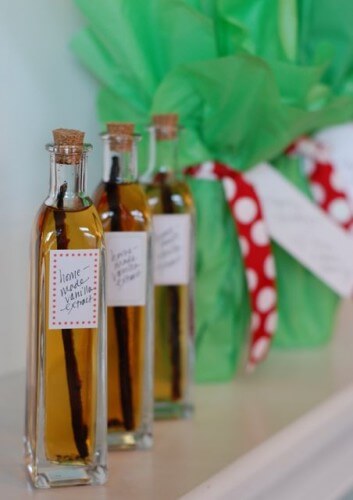 I adore all those cute treat boxes this time of year, and the ones pictured below from Michael’s Craft Store (that I purchased with a 40% off coupon) are no exception. But just because they are “treat” boxes doesn’t mean you have to fill them with cookies, sweets, and cupcakes…try thinking “out of the box” instead! Okay, kidding. There’s nothing like a cheesy joke to lighten the day. 🙂 Anyway, pictured is an assortment of whole-grain pumpkin, zucchini, corn bread, and blueberry muffins or you could also add some banana nut or cinnamon raisin muffins to the mix as well. As far as I am concerned you can’t go wrong! (Hint: Make your muffins in advance, and store them in the freezer until gift-giving time.) 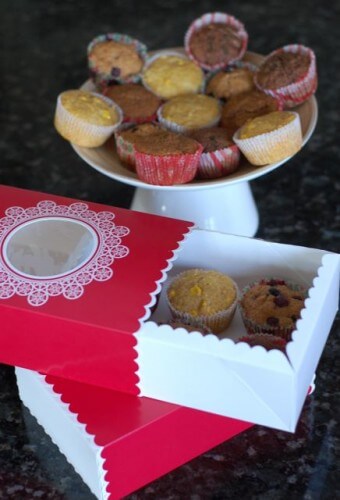 Whether it’s a meat rub for chicken or pork or a spice mixture for homemade ranch dip (or all three!) this could be yet another unique holiday present. Craft stores like Michael’s and A.C. Moore sell cute little containers and jars – meant for wedding favors – and with one of their weekly 40% or 50% off coupons it could be a rather affordable gift idea as well. Attach a recipe card detailing how to use the spice mixes and you end up with another creative gift idea! 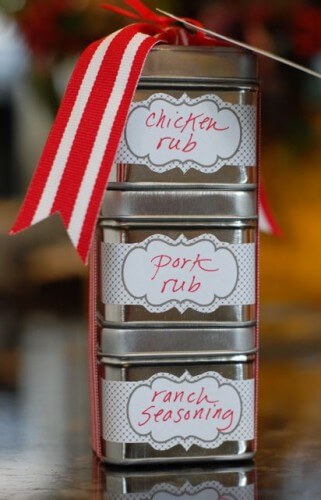 This is what we eat (and love) for breakfast almost every single day so I can’t think of a better reason to share it with others. You could give the granola cereal version in a jar or gift bag or make some granola bars with dried fruit and put them in little treat boxes (which is what I gave out last year). Don’t forget a little recipe card to go along with it because you know you’ll leave them wanting more! 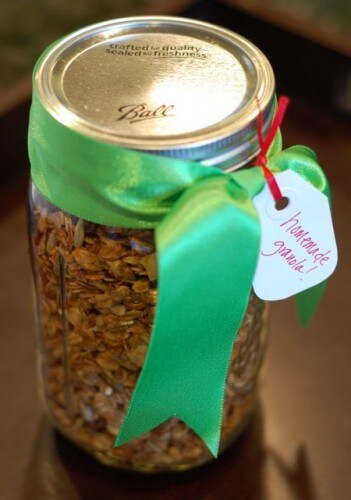 If you make your own bread either in the oven or in a bread maker you have an advantage because that’s just one more very thoughtful and tasty holiday gift you can offer. Whether you want to make the standard Honey Whole-Wheat Sandwich Bread or a Cinnamon Raisin Loaf I can’t imagine anyone being disappointed. I’ve actually given out loaves of bread as “thank you” gifts before, and they were very well received! 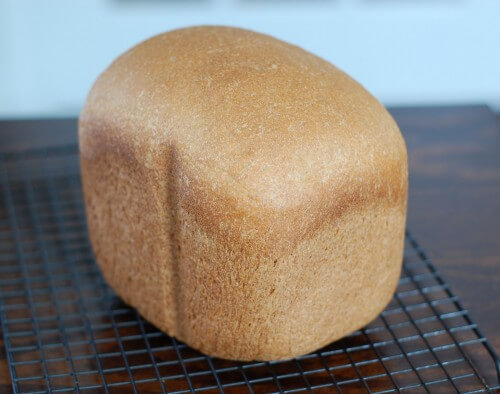 This Cinnamon Glazed Popcorn recipe is easy to make and a crowd pleaser. I also have a standard glazed pecan recipe that we love, but don’t be afraid to mix it up by adding extra pepper or even making something with a stronger flavor like Thai Curry Cashews. You could also add in extras like plain popcorn, pumpkin seeds, dried fruit, or unsweetened coconut to make more of a spiced trail mix. The possibilities are endless! 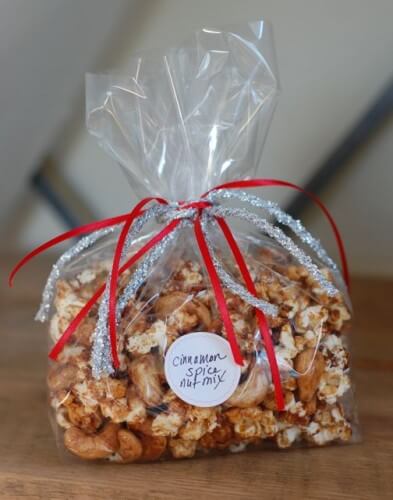 If you have a pasta machine (like me!) then don’t be shy because just about anybody would love to get some fresh, homemade whole-grain pasta as a gift. You could pair it with a jar of organic and/or local tomato sauce and block of good Parmigiano Reggiano cheese if you really want to get fancy. It would make a very nice – and memorable – holiday gift.

I personally have never canned anything (it’s on my to-do list!), but if your pantry is stocked with homemade pickles, salsa or whatever else you were busy making this summer then wrap a red bow around it and call it a day!

I do happen to have a lot of homemade soups in my freezer (in both small and large jars), and if you were giving a gift to someone that could refrigerate or freeze it again right away I think this so-called “meal in a jar” would be very much appreciated. Even a cold soup (or assortment of soups in small jars) that had not yet been frozen would be nice to offer as well. Think of those teachers that have to try to avoid the lunch line every single day! 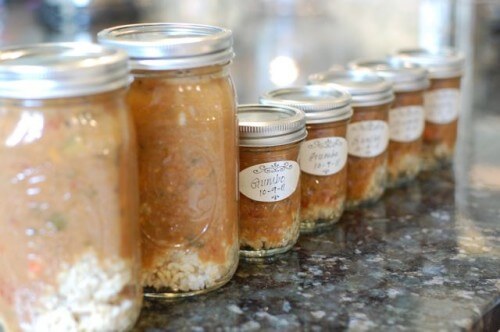 Rather than giving someone premade soups you could also create a jar full of pretty layered dried beans and spices along with a recipe card for making homemade soup. Also, I saw a picture on pinterest where someone made their meals at the beginning of the week in attractive layers in big clear glass jars (would love for someone to do that for me!). Once again if you are giving a gift to someone that could keep things cold this could be a very unique and useful idea.

If you have a dehydrator or know how to make your own beef jerky or dried fruit (cinnamon spiced apple chips, anyone?) in your oven this could also be packaged up in cute little bags and given as a holiday gift. I might have to experiment with this idea myself for next year!

This is a little off-topic since it isn’t a gift you give to others, but it actually is sort of a “gift” you give to your children as you count down to Christmas. I’m sure we’ve all seen those pre-filled advent calendars with a piece of candy or chocolate for each day, and two years ago I followed suit by filling my own little advent house with everything from skittles to M&Ms to gum, etc. Well, last year was our first holiday season since our switch to real food so I was racing all around town looking for little gadgets, figures, and toys that were small enough to fit in the little doors of our advent calendar. It ended up being a bunch of plastic junk that the girls quickly lost interest in…or actually just “lost” because they were all so small! So this year I’ve been inspired by an idea from This Lunch Rox to turn our advent house into a “giving house.” She created a gorgeous little “giving jar” with some amazing ideas, and since I don’t want to over commit our already busy family we are going to do a scaled down version of her brilliant idea! I am going to get a set of blank business cards from the office store and write little suggestions on them that my daughters can do each day on their own. Some examples might be writing a nice letter to their teacher, making holiday cards for children who are ill, writing a letter to a soldier overseas, or even giving extra hugs or compliments to others that day. I figure those little cards will fold up and fit in the doors of our new “giving house” nicely, and if I intertwine them with a few fun gadgets (similar to last year) it will hopefully be a smooth transition! 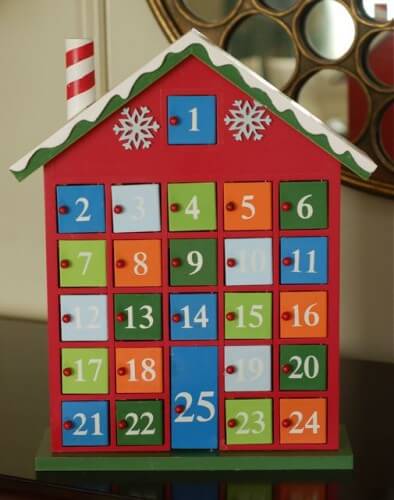