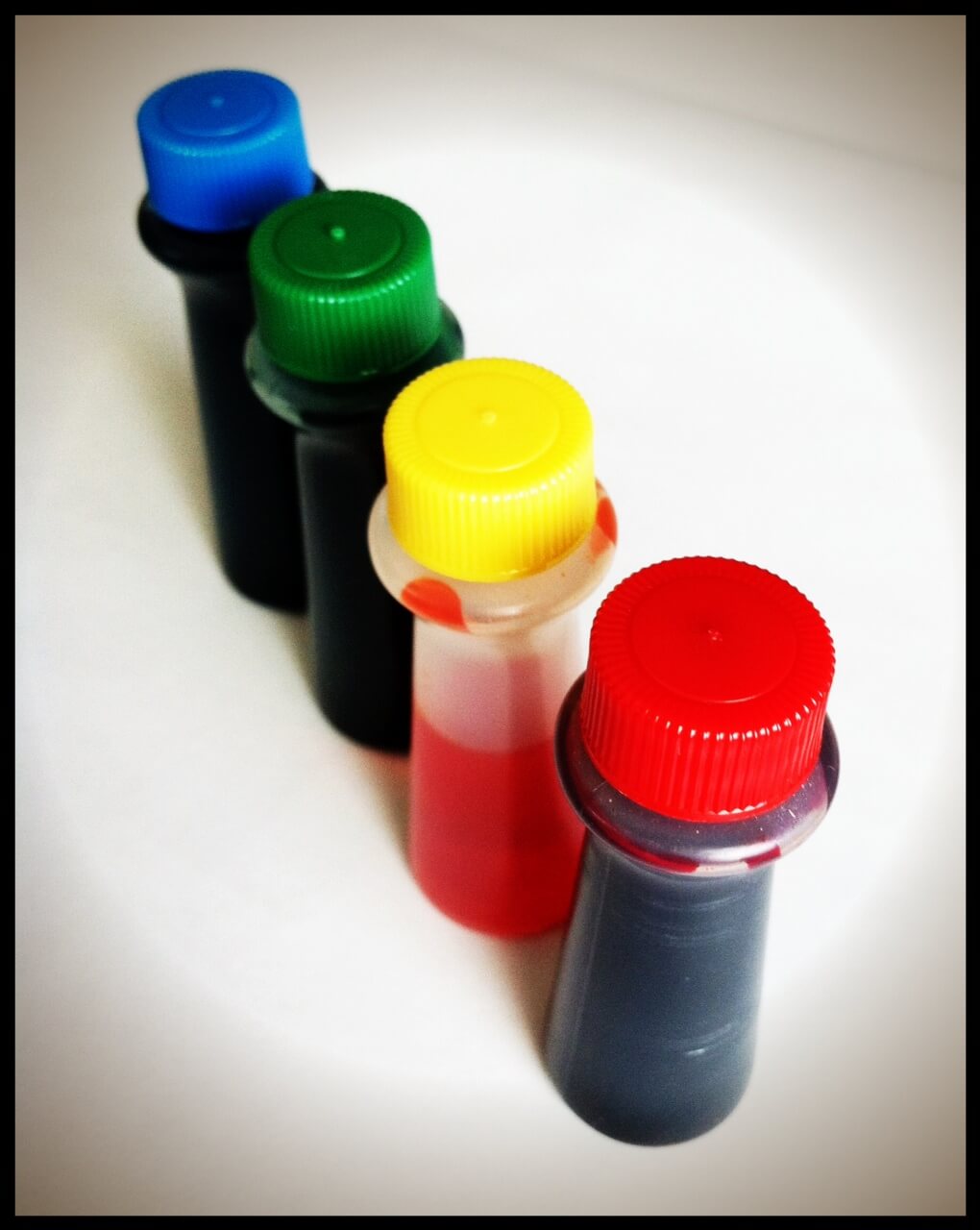 1. They are made in a lab with chemicals derived from petroleum, a crude oil product, which also happens to be used in gasoline, diesel fuel, asphalt, and tar.

NPR.org: “Artificial food dyes are made from petroleum and approved for use by the FDA to enhance the color of processed foods.”

2. They’ve been linked to long-term health problems such as cancer. If you’re a child of the ‘80s (like me) do you remember that rumor about red M&Ms causing cancer? Maybe it wasn’t just a rumor after all.

CSPInet.org: “The three most widely used dyes, Red 40, Yellow 5, and Yellow 6, are contaminated with known carcinogens, says CSPI. Another dye, Red 3, has been acknowledged for years by the Food and Drug Administration to be a carcinogen, yet is still in the food supply.” FYI – According to Wikipedia, “A carcinogen is any substance … that is an agent directly involved in causing cancer.” !!!

CBSnews.com: “There’s no good reason not to ban Red 3, something then-acting FDA commissioner Mark Novitch tried to do in 1984, saying the dye ‘has clearly been shown to induce cancer’ and was ‘of greatest public health concern.’ … Other dyes, namely Blue 1, Red 40, Yellow 5, and Yellow 6, are known to cause allergic reactions in some people and have shown signs of causing cancer in lab animals. Of course, this isn’t the same thing as leading to cancer in humans, but it argues for limiting intake, especially among children, who are getting the biggest dose of food colorings from a gazillion brightly colored, fun-looking foods.”

3. Did you know that food products containing artificial dye are required to have a warning label in the U.K.? The label states that the food “may have an adverse effect on activity and attention in children.” So speaking of M&Ms, they aren’t so brightly colored in some countries outside of the U.S. because manufacturers would rather do away with the artificial dye than have to put a warning label on their products.

Mercola.com: “This is why if you eat a Nutri-Grain strawberry cereal bar in the United States, it will contain Red 40, Yellow 6 and Blue 1. But that same bar in the UK contains only the natural colorings beetroot red, annatto and paprika extract. In fact, the UK branches of Wal-Mart, Kraft, Coca-Cola and Mars have removed artificial colors, sodium benzoate and aspartame from their product lines as a result of consumer demand and government recommendations. In the United States, however, the Food and Drug Administration (FDA) continues to allow these toxic ingredients in countless popular foods, including those marketed directly to children.”

CBSnews.com: Many Grocery Manufacturers Association members (like Pepsi, Kraft and General Mills) “have switched to natural colorings in their products in the U.K., where warning labels are required, but they’re not doing that here for the most part. That’s because no one’s making them do it, and switching would cost a lot of money.”

4. Synthetic food dyes have been shown to cause an increase in hyperactivity in children as well as a negative impact on their ability to learn.

Washingtonpost.com:”Artificial food dyes (in combination with a common preservative) could make even children with no known behavioral problems hyperactive and inattentive.”

CSPInet.org: “The science shows that kids’ behavior improves when these artificial colorings are removed from their diets and worsens when they’re added to the their diets.” and “While not all children seem to be sensitive to these chemicals, it’s hard to justify their continued use in foods—especially those foods heavily marketed to young children.”

Mercola.com: “According to scientific studies, these dyes are causing behavioral problems and disrupting children’s attention.”

5. They add absolutely no value to the foods we are eating, but do in-fact pose quite a few serious risks.

Huffingtonpost.com: “These dyes have no purpose whatsoever other than to sell junk food.”

CSPInet.org: “These synthetic chemicals do absolutely nothing to improve the nutritional quality or safety of foods, but trigger behavior problems in children and, possibly, cancer in anybody. The Food and Drug Administration should ban dyes, which would force industry to color foods with real food ingredients, not toxic petrochemicals.”

6. They trick your senses…just like other artificial additives including sweeteners.

In Defense of Food: “One of the problems with the products of food science is that, as Joan Gussow has pointed out, they lie to your body; their artificial colors and flavors and synthetic sweeteners and novel fats confound the senses we rely on to assess new foods and prepare our bodies to deal with them. Foods that lie leave us with little choice but to eat by the numbers, consulting labels rather than our senses.”

7. They are contributing to the obesity epidemic by attracting children (and adults) to highly processed food, which in many cases is being eaten instead of fresh whole foods.

Washingtonpost.com: “Beyond the behavioral problems and cancer risks, the greatest hazard that dyes pose for children may also be the most obvious: They draw kids away from nutritious foods and toward brightly colored processed products that are high in calories but low in nutrients, such as fruit-flavored drinks and snack foods. Those types of foods are a major force in America’s obesity epidemic.”